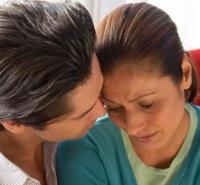 Jenny and Ahmet phoned Tavistock Relationships in August 2009. They asked for an urgent appointment and after an assessment session they were offered sessions with a counsellor called Jo.

Jenny and Ahmet had been having a rough time since his mother had come to stay from Turkey. Ahmet’s father had died in February and his mother, feeling lonely and sad had asked to if she could spend an extended holiday with them. She had been staying since April and while Jenny was keen to be supportive and caring, she was finding living with her mother-in-law very stressful.

Ahmet and Jenny had had some angry rows about the whole situation, culminating in Jenny threatening to leave home, taking their 22 month old baby with her. After this, Ahmet had emailed Tavistock Relationships for an appointment.

Ahmet and Jenny came to 22 sessions with their counsellor Jo, where they explored their situation and thought about the way forward. Jenny and Ahmet began to understand that there difficulties had existed before the arrival of his mother, but that this event had pushed them over the edge. Adjusting to a new baby and losing a parent were the themes that they worked on until they felt that they had a better understanding of each other’s point of view.

This understanding led to a new closeness and together they addressed the issues that were facing them. When they finished their sessions just after Xmas, they both agreed that the counselling had been very helpful and said they would come again, if the need arose.

You’re not alone; it is very common for relationships to be rocked by change. Our video demonstrates a scenario of a couple having a row after the arrival of a new baby. Our second video shows how, through relationship counselling, the couple have found a way to talk together about their feelings.